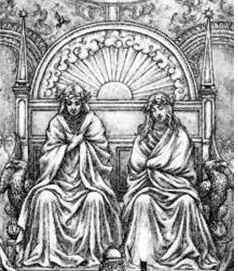 Ida and Pingala getting Married    ღ

When the polarity forces represented by the Nerve Channels   Ida and Pingala +/ –  the 2 out of 3 nerve channels in the spine marrow are Balanced and ´Married´, a greater force can pass freely through the 3rd central channel down and up & through the brain.  Also the Marrriage can open up in a way, so that the  Soul or ´Higher Self´  can or may  be directly fully through and control the physical body and brain.
.

The Sutratma or Silver Chord ´reflects itself ´ in the Spinal chord and its 3 nerve channels .
.

Before the day of The Wedding preparations is made of Red and White Wine,
to balance their refinements into a third perfect solution.

Across an infinite ocean of stars, the sun and moon divided,
but inside forever ceremonial united ╰☆☆ ☆╮ ღ 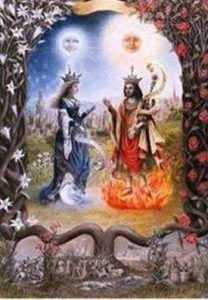 (Se note 1 : Glamor of The Divine Feminine in the end )

Ebbs and flows, rise and falls .

Macro cosmic rotational forces and cycles and spirals as well as microcosmic.
Wheels within wheels and spheres within spheres and dfferentiated rotational spins.

Polarities are to be seen in ;

The Law or principles of Rotations or rotational force.
Eg 1 force become 2 counter rotational forces ( ´self –upheld´ )
Laws of opposite manifest forces, spirals and eg evolution and involution spirals.
Circular movements become spiral, and can have the possibility,
of rebeginnings at a higher point spirally speaking. Or opening to ´higher evolution ´
( seen from the angle of below in this system ).

The Sphinx on the Wheel, in the symbolic card of the Great Work of embodiment  ;
´Adeptship ´ can be/ are symbolized by the Sphinx on top of the Wheel.
top of the rotating wheel ,… 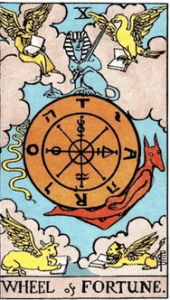 Can be expressed by Black and White ; 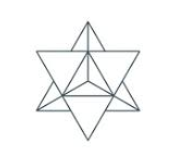 If Love has a polarity such as hate, its not love, but Desire disguising
itself as ´love´ ( ie repulsion /attraction, which also have ´equivalence´
in physics and ´multidimensional physics´) . True love has no polarity,
has it ?

The Hexagram, 2 intersected triangles, multiple inlay of meanings, of which some is unison of maskuline / feminine , fire/ water, higher 3fold nature /lower 3-fold nature, spirit – matter ,  micro-macro cosmic, as above so below,  — as there are ´higher and lower triangles ´ cosmically and in the body.

Re the Central Channel in Spine Marrow & and the Kundalini :

A Full Kundalini Rise, meant as through all 3 Channels ´ Becomming as 0ne ´ needs good adjustments & coordination of body and subtle bodies and nervoussystems etc  and purification, clearings and healing and good balancing of lower chakras and Grounding. Ideal it should Not rise full 3 channel prematurily as ” besides its connectedness to ones own spiritual energy” , it also Revelates in activation and cleansing /burning ( of seperating tissue, veils and limiting particles and filters , burning of impurities ) what one  have already created ´ angels or demons´, or/ and deep traumas can be devoided too soon to really be handled well and proccessed, which can cause depression in the system, ´too much light´ can devoid too much at one time. which can also happen in a birth situation  …. and/ or it can create very literal physical pain.

One of the conditions for rising it safely is having attained pure desire.

Kundalini energy is the ´lower fire´, where Monadic or  Spiritual fire is the higher fire from
above and Mental fire the middle fire .
.
Electric fire, solar fire (or cosmic mental fire)  and fire by friction,
really One Fire essentially,
yet can be experienced diiferently
because of differentiations of consciousness.

There is an evolutionary point /process of meeting of the 3 fires ….

☆ The sexual energy (or parts of it ) can be consciously  directed  or transferred upward to the
Throat, the higher creational point,  or refined into ´higher bodily triangle´ ´ head -heart -throat ´.

Note 1  : Glamor of The Divine Feminine

The Glamor of the Divine Femine,  has become prevalent
in many glamorous pictures and writings.
.
.

Circular logic or circular reasoning. Balance is not one
polarity over the other, eg neither maskuline or feminine,
as above so below, as within ( ida ~pingala) so without.

To connect with the Divine a Man need establish
and work on his Inner Soul Connection and
Soul Alignment, not give all power away to
´a women to connect him ´ in ´astral worship´ .
.

Women should not be on a pedestal over men in that regards
but neither should a man be authoritarian over a woman.
.

Qualities and attributes of both (true) maskuline and feminine
respected, healed  and given place.
.

Balance is the Key ;  Reflected from Inside out like the nerve
channels Ida and Pingala representing Maskuline /Feminine,
polarity forces needs be balanced , not one above the other.
As above so below, as within so without.
.
.

Historically in long back retrospective theres shiftings
between matriarcical rulings an patricals rulings and their
effect in consequence and ´karma´, that I can not go into right
now and see all .., but the main point , as I see is Creating Balance
and honouring both the feminine and maskuline, ..and also move
beyond polarities and polarity dominance .
.

Honouring rights, holistically,  is the honouring rights of both woman
and man, animals, nature and children. And a lot of things in this
´glamor ´ is ascribed to be ´the divine feminine´ wheras its a
natural consequence of Soul Connection, Soul Integration weather
being a man or a woman on this level.*
.

Maybe some of this Glamor is Atlantean in origin, an old glamor
with parts also connected to what began to happen at that time ;
´misapplied or fragmented  higher esoteric knowledge and
symbolism  fell into lower astralism, and astral worship´.

Excerpt of Circularity and Transcendental Logic. 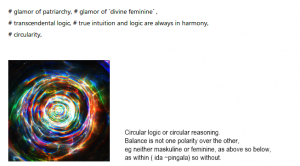 NB : Im not agreeing generally with the whole ´vedic system´ and how they have translated, understood, named & ´copyrighted´ (with their ´god paradigme system´ e.g . ) more ancient (Atlantean ) knowledge of the whole internal subtle body system Just using the names Ida and Pingala for reference understanding.
..

1 )  Picture from chymical wedding of Christian Rosenkreutz , published by lectorium rosicrucianum, im not advocating for LR but also im not not advocating for it, name irrelevant to this post , however if any Rosicrusian link, i rather share this by Paul Foster Case for reflection: The True and Invisible Rosicrusian Order
http://www.themasonictrowel.com/ebooks/rosicrucian/Case_-_The_True_And_Invisible_Rosicrucian_Order.pdf