That expresses itself living, direct, pure, intuitive,
It can express instantaneously creative for any practical purpose on the physical plane needed.

It can not be taught from the outside, it is prevailing from the inside . . . as a streaming flow.

I write ´intuitive´ as the intelligence does not require any previous thinking or analysis,
but can of course expres through thought and logic as well. As well be holistic.
.

.sometimes despicted with a circle around has multiple inlay of meanings, the circled hexagram can also signify ´the hierophantic symbol ´.

The Hexagram one level it can be seen as an ancient symbol that gives understanding to some of this current universe structure, revealing geometric bulding structures and building blocks, also (esoteric ) inside as there are higher and lower triangles in the body. As above so below, as within so without.

The Two Intersected Triangles can slso be seen eg as union of higher threefold nature with lower threefoldnature, union of maskuline /feminine, fire and water, micro and macro cosmos, above and below.
.

One of the great things about Symbols, besides preserving knowledge, is that they can convey many meanings at the same time, and each can understand/ translate intepretate at their individual level,  and at the same time train the intuition, correlational abilities and  connect the conscious and subconscious.
.
The upwardpointed pentagram is written of in this text  after the middle section ; Walking with the elements
https://www.in-luxia.com/2018/06/22/walking-with-the-elements/
.

Lotus is an ancient symbol of regeneration and rebirth.  .

Emerald Green as Eternal Spring,
Emerald is  an ancient symbol of Eternal Life,

Both The Veil, behind the High Priestess and the dress of the Empress has Pomegranate imprinted. 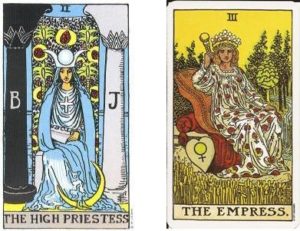 I am not advocating a specific ´ hebrew translation ´  of the cards re the ´ letters ´ on some,  but what is universal or essential, of the great work of embodiment.  Pictoral essentials go long back,  Atlantean.   Nobody owns the ancient symbols of the universe and cosmos,  but different groups/ societies / traditions/ religions / times have used them and some have their own intepretations of them and ´creational print´, coding or ´overlay´ on .  Some symbols may have been re-coded with distortions and some symbols are ´distorted mutations´ or ´inversions  compared to a more ´ blue printed version ´.
.

In regards of in  todays world  many symbols have been/  is subjected to much old religious standard demonization, misintepretations of conspiracy theorists, propaganda and online disinformation, distortion and bias ;
Symbols, esoteric and occult symbols or ancient symbols of the universe and cosmos.
Symbols like ´energy´ are not ´bad´ in themselves, however intent, use and method has something to say.
.

If people understood  ´the real meaning of tarot´,  theyd be ´enligthened´, self knowledgeable, liberated and understand how Natural Law works *if they chose selfwork, experiental knowledge, ´self initiation´  and self responsibility over dogma.  Essentially not divination, but keys reflecting the inner and outer current universe of which we are embodied in on cosmic and physical subcosmic planes.

The Circled dot Symbol or the circumpunct symbol ; 1 Primal Source / – Primal Force. Through the dot is created/projected the first line, (lines) .. The Center from where all emanate from, and a return point . 2) Alternate overlay symbolisms; the dot represent your spirit or core self point at the center of your space. 3 A center place to return to or a centerpoint to focus opon or observe from, a place to Be from . 4) Dot represent Monad. 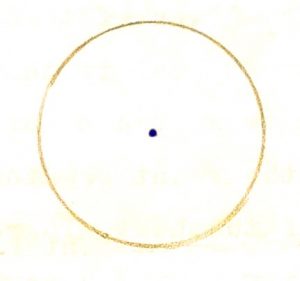 Regarding the ancient table of alchemical symbols. Ancient allegoris covered not only ´chemical reactions´,  but also alchemical transmutations, philosophical  and metaphysical principles, of nature and supernature.
.

The Equal Armed Cross  of  Nature or ´Supernature´.

The  Cross of Balance  can signify several meanings. .. .

Only a  ´Fool´ worships physical objects, Symbols are but symbols.
.