Diamond is associated with the 1st Ray of Will,  Power.
.

Monarchy, True Anarchy and Hierachy below the middle section.

Diamond besides its healing qualities and association with the Crown Chakra, also symbolically associated with the perfected diamond soul, reflecting all the colours of the rainbow as well the abillity of reflecting the pure white light, and shining forth through a set of  purified lower vehicles.
And  *4  ( se note in the end  ) symbolic of the ´carbon transfiguration ´ of the human physical body…. ´ diamond body ´ .

It is possible in healing or ceremonial work,
a clear quarts crystal, shown to the right,  can ´substitute´ a diamond to some extent.

The Cullinan Topaz shines with a brilliance of Diamond. Topaz is a gem that has been related to the 5th  Ray of knowldege, and science. Its hardness however is 8 where diamond is 10. And  it has not the same high ´refraction fire´ as diamond. Topaz is associated both with physical and metaphysical healing energy. White Topas is like diamond also associated with The Crown Chakra. The real natural beautiful light blue topas are rare, most of the ones to be found are threated. 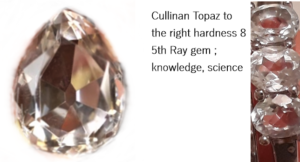 Geologically speaking, the beautiful natural Blue Diamonds get their colour from the chemical element Boron ( B),  by trace elements of boron having entered into the crystal lattice. 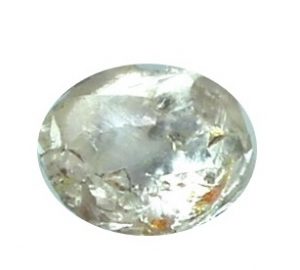 Most coloured Diamonds and Sapphires today are unfortunately irradiated or warm heated. Where many Emeralds are ´oiled ´to strengthen them for more resistance  with their ´softness´  and for lush  shine, however their inclusions are considered part of their unique beauty. Many Rubies or ´Red Sapphires´  today are subjected to threatments of filling or heating.

Sapphire being a gem associated with the second ray, of love -wisdom.  Emeralds ; with the 3rd ray of active intelligence, and also accociated with the heart and heart healing. Personally I have experienced Emerald in a fine connection with the 3rd eye, usually however  it is crystals like darker blue or indigo,  purple connected to that area like dark blue sapphire or amethyst.

Emerald is  an ancient symbol also of Eternal Life and Rejuvenation.

Both gems held sacred in different civilizations since ancient times.
. 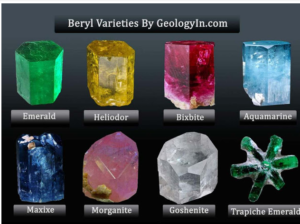 .
Some Emeralds come very close to Aquamarine in clarity and colour,especially
some of the Siberian  Emeralds in very light greenish / blueish colour tones.
.

Aquamarine like The Calm Stillness Of The Sea,
Aquamrine stone was used in ancient Egypt, worn as protective
amulet, and for pain relief, and aquamarine bead necklaces were used.
Aquamarine were  also  associated with prophecy, deamwork, dream recall and meditation.
:
.
.

Emerald  is 7 or 7,5  – 8   on the  hardness scale where sapphire is 9.
.
Also there are reasons for both Emerald Tablets and Sapphire Tablets,  although some ancient ´Sapphire Tablets´
may  also have been lapis lazuli,  as the name sapphire in one translation  simply mean ´blue stone´ .
.

Blue Sapphire is a variation of the mineral corundum, and traces of titanium and iron in the crystal lattice
contribute to the beautiful blue tones.

Red Sapphire or Ruby is an ancient symbol of the Sun, or a Gem Stone associated with the Sun, And flame, and fire.

Natural sapphires like this red, or blue par example have a certain strong vibrance and radiation, as their energy or consciousness is reflected into physical form of the mineral and crystal kingdom . . . .And equally in ´our kingdom´, the atoms of the different bodies can have or become more radiant or ´active´ .. ” solar radiance “, or “fire radiance” like diamonds to use another analogy.
.

Red Sapphire. The red variation of the mineral corundum, is the only variation ´technically speaking´ not called ´sapphire´, but ruby .
.

Amethyst was in ancient times
considered among the kardinal precious stones,
a gem also associated with the 7th Ray of ceremonial order
or ceremonial magic.

.
.
Great to have for ´atmospehric healing´  and good for plants to have
amethyst near or hanging on them, a stone of calmness also for animals  and children.
Vibrant deep royal purple colour to clear violet, and light violet white-ish variations of quartz crystal.
And purple diffrentiations of more red toned, lush ´raspberry like´ or blue toned.
Have been associated with the crown chakra, ajna chakra and third eye and etheric chakras.
.
.

Re the chakras ; the deeper down one go in cleansing & balancing of chakras, the higher up one can go –
at least in a fully balanced, stable way, that is grounded  . . .

Gems and Crystals of Today
.

There are several things that casts a shadow re the  beautiful natural and precious gems of earth ; remnants of Atlantean crystal abuse, overpricing, quantity massproductions, non-fairtrade and unethical minings, corrupted people who sell synthetic made stones and glass as real gems. Enhancing, irradiating, warming up to high degree the true natural beautiful gems, to fit  an ´ unnatural social programmed standard.´

Should be remembered also that much ancient knowledge of Crystals, is of course not on the internet for various reasons.
And that there are also ´new age outwaterings´ info, ( like theres glamorised new age outwatered ´law of attraction ´info .. ) of ancient crystal knowledge, new age glamor,  personality / lower ego focussed / ´dark magic´ tainted info remnants of old Atlantean crystal abuse .

“ Diamond Sun “,  like a Radiant Solar Orb… reflecting ….´like a Sun´. Natural yellow diamond is caused by gathering of nitrogen atoms in such a way within the crystal lattice, that blue light is absorbed and yellow reflected.

The Great work and the Greater Work
.

If you wear or  have a precious gem or crystal, asking within what you can do to assist the gem *evolutionary, how you together can take part in The Greater Work,  ´ white magic ´ or soul centered work.   Ideally each ´single great work´,   is to be in service of or ready to take part in ones share of ´ The Greater Work ,  it creates new openings, as opposed to just aquiring ´gems for what they can do´ ´ just for you´  personality- lower ego- centered, as opposed to ´higher self  I ´ focus.

The Higher Self –  And The Throne  Between The Eyes ;
The original ´Soul Seat´ before i.e the planetary Atlantean fall,
where after generally speaking the personality became solar plexus polarised.

It could also be discussed, in this many cases digressed world, weather certain royalties with thier ´royal regalias´,  should or should have worn / ´ worthy of ´ precious gemstones in ´magical scepters´ or on a symbolic crown,  if their Real Crown ; Crown Chakra  ( souvreignty ),  was  not connected to the inflow of  The Source, causing them to have been an example  of *  higher virtues such as justice, purity, love, truth, divine will, knowledge, wisdom  leading people to grow in spirit and by real education of the mind, body spirit, and the nature worlds and threat these worlds with respect and care and teach them to exercise self responsibility and be selfempowered in inner spirit.
.

Many people have been worshipping others crowns and given their energy away .
.

Nourish your inner flame for it is a spark of the one great flame, light.

The Essence of  ´ Real Anarchy´ I like ;  I do not violate you,  you do not violate me.  I do not try to control you, you do not try to control me etc. Not even as ´laws´ but as natural unwritten ´codes´ of respectful peaceful co-existence. which ideally is or would be a loving civililazation with adherence to internal (spiritual) authority, but unfortunately atm most people don´t practice that level of self -responsibility it takes or would take, and it seems many  would likely rather bow to ´ archonic rulers´ and ´archonic rulership´ in principle and literally . . . weather ´disguised´ governmental or religious or ´spiritual ´ etc.  The latter mentioned in reference to the  translation of the word anarchy as :  ´ without archons.´

Anarchy ; Without ´archonic rulers´ not without ´unwritten rules ´ or order or without conscience or self-responsibility.

Why I think, even it may sound contradictious on a ´ relative level´  as a King ( or Queen) pr some definition is a ´ruler´,  that a ´ True King´ should rule the Kingdom like a ´ True Anarchist´ ;  not rule over people, but make them self /soul -responsible.  Real Crown is Crown Chakra, ( souvreignty ) to be connected to the inflow of The Source, to be an example, of * higher virtues such as justice, purity, love, truth, divine will, knowledge, wisdom ; leading people to grow in spirit, be self-accountable, by real education about body, spirit and soul, health and holism, about the nature worlds and natural law, science of nature and higher nature,  and micromacro cosmic world, about ´death´ and transitions and respect for all life and self-responsibillity , not demand worship and have power over people, make them kings of their own Inner Kingdom / and bodily temples, adhering to internal spiritual authority.  Ideally Divine Order with Inner Spiritual Ruling.
.

.
Maybe, just maybe some can get what I am saying essentially,  if looking beyond ,  ´ seemingly relative contradictions ´  and beyond Source disconnected   fraudulent displays of power driven corrupted monarchies   and  corrupted hierachies  ..  And I feel that any ´true meaning´ of  ´hierarchy´  is about respondence not following orders.
.

In short,   E.g. ;   Hierachi  With  Internal Spirit above ;  Emotional, mental, physical  egoic hierachical worship of  kings, queens, or masters and titles  is not light or evolutionary path.  and also can create dependence,  blind obedience and power abuse and spiritual abuse, which there is a long history of on earth.  It is  not the ´real´ meaning of ´hirerachi´ which is about Respondence, not about worship or being controlled or taking orders .
.

Par Example :   Analogy of the Human Anatomy and Chakra System .
´Hierachiacly´ it could be said for the Base Center to begin evolutionary  respond to the Crown Center.
Eventually ´ lifting the energy from the base to the crown´.  With the outcome of living a full spiritual life in praxis.

.
.1st Ray Destruction . . . . to progressingly, eventually destroy all untrue, false and not in service of Higher Divine Will to be forfilled.

1st ray  ; The power to withstand, resist and destroy.
And to reveal truth and lies.
And eventually or ideally ´ true divine will be done´ .
.

To resist destroy and withstand all the needs to in this world .
All the nonsense, fraudulence, hypocrisy, evil, tyranny, mindcontrol and falseness religious, spiritual ,
material and otherwise.

.“ What you focus on will grow “ yes in some meaning of aggregation and amplification of energy ,
matter and substance and focus in the real ´magical´ esoteric and exoteric application
not in the sense of an ´ outwatered new age half- truth´ , It will Not exactly.. … if understanding
´ the true meaning ´ of using a sword metaphorically and literally , dissipating  in light and fire, and cutting ´weed´ by its evil roots.
.

.So much in these earthly and ekstra eartly layers, on a general level,  are and have been contaminated and infiltrated for a very long time . . . .

Fire and force of the  1st ray source

The Eternal Source is not about idolatry.  https://www.in-luxia.com/2019/05/02/the-eternal-source-is-not-about-idolatry/

or 7) Re-Configuration back into a more ´source-coded- immortal – template- state´ , or  to a more ´blue printed version´  as before the Atlantean planetary fall.