Does the sky unfold as a scroll
or roll up as a scroll,
unfold to read or roll up to conceal,
what is visible to one eye
may be invisible to another,
contradictive tempoarily appearences
can overlay eachother simulateneusly
also symbolically speaking. 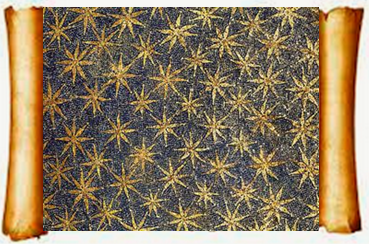 All the stars of heaven will be dissolved.
The skies will be rolled up
like a scroll, and all their stars will fall
like withered leaves from the
vine, like foliage from the fig tree.
Isaiah 34:4″

In another translation stars / light
is replaced with host.

The reference above ;
Stars ´natural´ illusory heavenly lights, or ´illusory magic´
of glittering stars vs digital artificial lights. In another translation
stars / light is replaced with host, is related to the manifestation of
a QR code in the sky, the symbol and mark of digitalization in the
sky written into the afterscript further below.
Scan and download from the Sky. 1500 drones formed QR code,
Shanghai, 22.04.21.

Something can both be concealed and revealed at the same time.

Digitalazations in The Sky ; See After Script below, with Gematria.

In Gematria, alphanumeric codes and encoded words and phrases
can hold multiple values and meanings on multiple levels simultaneously. 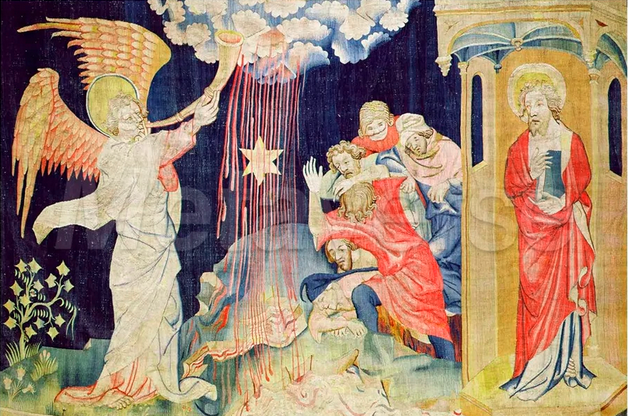 Revelation 8:10-11 The third angel sounded his trumpet, and a great star,
blazing like a torch, fell from the sky on a third of the rivers and on the
springs of water— 11 the name of the star is Wormwood. A third of the
waters turned bitter, and many people died from the waters that had
become bitter.

After Script with Gematria

QR symbol manifested in the sky. 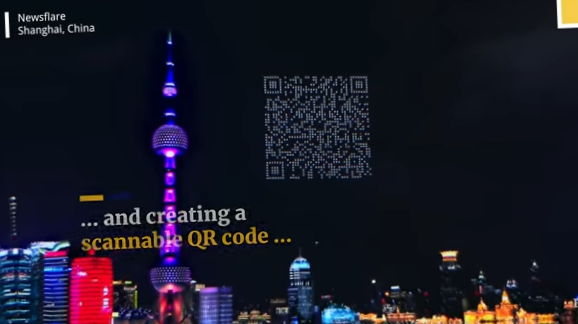 
One night I saw a symbolic vision in the sky of ´The Grim Reaper´,
to me the digitalised drone created Qr codes in the sky is more ´creepy´,
seen in the perspective of several agendaes.

One night in another night vision symbolic, one of the 4 Horsemen appeared, however
in this version, comming through ´ a rift in space /time´ . . . . . to be seen in the sky . .

I can see/remember a world or civillization ( ´past or elsewher´ ) with ´living crystals´
” floating/hanging ” in the air, no artificial light bulbs. This kind of digitalized world,
with a scancode ´mark (ed) in the sky´ now. . is to me death, anti-life, anti soul symbolic.

Note ; To whom made the above star gif, I dont know your name,
write me for credit or removal.

Walking With The Elements

Walk on earth – master the physical body / physical plane.
Walk on water – master the emotional and astral body /astral plane.
In one meaning water is also symbolic of the illusion.
Walk on air – master the mental body/ mental plane (s), thoughts and fire_s.

The text is meant metaphorically and symbolically also, not to betaken all literal.
To literally walk on water, withstand gravitaional pull is possible, but not where I
wish to focus.
´Walking on water´  can also refer to subjugation of the the sexual
energy, astral body.
There are many things to say about elemental forces and ´powers´ , the idea of not
playing with fire has meaning on another level too.
.
Emotion – water – elemental. Astral body – ´starry´.
Elementals can be transformed, transmuted, healed
Water and Life is connected

Water a symbol of life.
On one level water is also a symbol of the illusion as is the astral body.
( ie also the illusory astral plane.)
Elementals are transmutable, by the hand / light of the higher self.
Water is also symbol of fluidity and  flow. Water is connected with
cleansing, as is the fire that burn. Ideal to have the bodies in synergy
and alignment physical, etheric, emotional, astral, soul, celestial, light body.

.
Re Water and Illusion

sometimes despicted with a circle around has multiple inlay of meanings.

On one level it can be seen  as an ancient symbol that gives understanding to some of this current universe structure, revealing geometric bulding structures and building blocks, also ( esoteric ) inside as there are higher and lower triangles in the body.
.
It can also be seen as union of higher threefold nature with lower threefoldnature, marriage or union of maskuline /feminine, fire and water, micro and macro cosmos, above and below.
.

An Upward pointed Pentagram have several meanings including :   The spirit / higher self within master /rule /subjugate the elemental layers within / lower subtle bodies,  an initiation symbol, a protective symbol against dark and evil spirits,  the microcosm, the 4 elements +ether …
.

“The pentagram is the figure of the microcosm—the magical formula of man. It is the one rising out of the four—the human soul rising from the bondage of the animal nature. It is the true light—the “Star of the Morning.” It marks the location of five mysterious centers of force, the awakening of which is the supreme secret of magic.”
– Manly P. Hall

.
In these Cosmic -physical planes, The  Ether can be concidered  as ´matter´ as well,  just the finest most subtle substance of matter, compared to mental matter, astral matter, and physical matter, but of which these ´denser forms of matter ´ and their subplanes are manifestations of in their differentiated densities and substance qualities.
.

The branches of the Tree, flexible, to the winds and storms,
To bend and not break …   like a master of the wind.
A Tree that has its roots firmly in the ground stands stronger than a tree,  which seeks only to have its branches into heaven.
.

Walk the Black Sea like a Star ⛥ – Master the Self
.

╰☆ ╮Through the Ethers of the Night,
Into the Radiating Black Sea ..
A place of peace,
.