Walking With The Elements

Walk on earth – master the physical body / physical plane.
Walk on water – master the emotional and astral body /astral plane.
( In one meaning water is also symbolic of the illusion, and as in not being ensnared by it ).
Walk on air – master the mental body/ mental plane (s), thoughts and fire_s. 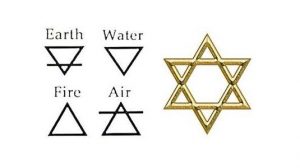 .
NB: The text is meant metaphorically and symbolically also, not to be taken all literal..
´Walking on water´ also refer to subjugation of the astral nature,
and in some meaning it can also relate to the subjugation
or control of the sexual energy.
To literally withstand the gravitaional pull and materialize the power to literally walk on water
is of least signifigance in the context in which this is written.

sometimes despicted with a circle around has multiple inlay of meanings.

On one level it can be seen  as an ancient symbol that gives understanding to some of this current universe structure, revealing geometric bulding structures and building blocks, also ( esoteric ) inside as there are higher and lower triangles in the body.
.
It can also be seen as union of higher threefold nature with lower threefoldnature, marriage or union of maskuline /feminine, fire and water, micro and macro cosmos, above and below. 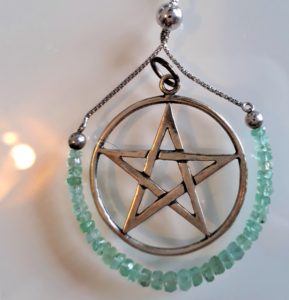 An Upward pointed Pentagram have several meanings including :   The spirit / higher self within master /rule /subjugate the elemental layers within / lower subtle bodies,  an initiation symbol, a protective symbol against dark and evil spirits,  the microcosm, the 4 elements +ether …

“The pentagram is the figure of the microcosm—the magical formula of man. It is the one rising out of the four—the human soul rising from the bondage of the animal nature. It is the true light—the “Star of the Morning.” It marks the location of five mysterious centers of force, the awakening of which is the supreme secret of magic.”
– Manly P. Hall

.
In these Cosmic -physical planes, The  Ether can be concidered  as ´matter´ as well,  just the finest most subtle substance of matter, compared to mental matter, astral matter, and physical matter, but of which these ´denser forms of matter ´ and their subplanes are manifestations of in their differentiated octaves and substance qualities.
.

The branches of the Tree, flexible, to the winds and storms,
To bend and not break …   like a master of the wind.
A Tree that has its roots firmly in the ground stands stronger than a tree,  which seeks only to have its branches into heaven.
.

╰☆ ╮Through the Ethers of the Night,
Into the Radiating Black Sea ..
A place of peace,
.